A workshop with Helen V. Pritchard and Femke Snelting

"As such, urban politics will largely be a peripheral politics, not only a politics at the periphery, but a politics whose practices must be divested of many of the assumptions that it derived from the primacy of 'the city'.”[1]

During this on-line session, we worked for the first time with the eight conversations on infrastructural shifts that TiTiPi had organised with companions in the months before. To attending to the stories that were told and the suprising details that came up through the rhythm of three refrains, was an attempt to listen for the experiences of living with infrastructure but also for other worlds of radical care and different temporalities not defined by Big Tech infrastructure nor by academic methods, worlds that are already here, that are already being practiced.

In this workshop, we tried not to fall for the suggestion of a coding or analysis that might make sense of transcripts from the outside, we listenened together to generate a poetic-theory of infrastructure. We generated an understanding that was feeling into the surges of life, or what AbdouMaliq Simone calls the rhythms of endurance with infrastructure.

We borrowed the idea of 'refrain' from Kara Keeling who suggests that we need to listen for ––another world that is possible because it is already here.[2] Listening through different organizations of things, different systems of signification and value, so much so that it might give way to the another world. Sung in the refrains with other temporalities and coordinates, yet already here.[3]

Perhaps this world gives way in the peripheries, AbdouMaliq Simone reminds us of the importance of what he calls a 'peripheral politics', of a-centric practices and rhythms: "[s]urges of rhythm emerges from attempts to reach beyond the confines of limited places and routines, and yet retains a microscopic view of the constantly surprising details about the places that could be left behind".[4]

The workshop "Peripheral Politics" was a way to organise and categorise research material not based on the extraction of meaning but on the collective listening and responding-too through a set of interconnected prompts. The transcriptions opened up onto urgencies, repetitions of stories, giving ways to other worlds, partially told.

Transcript marginalia from our workshop

Refrain: "start with the small things, while keeping in mind the big ones"

Refrain: "making the most of the hinge"

Refrain: "making the most of the hinge"

Refrain: "beginnings that happen in the middle of things" 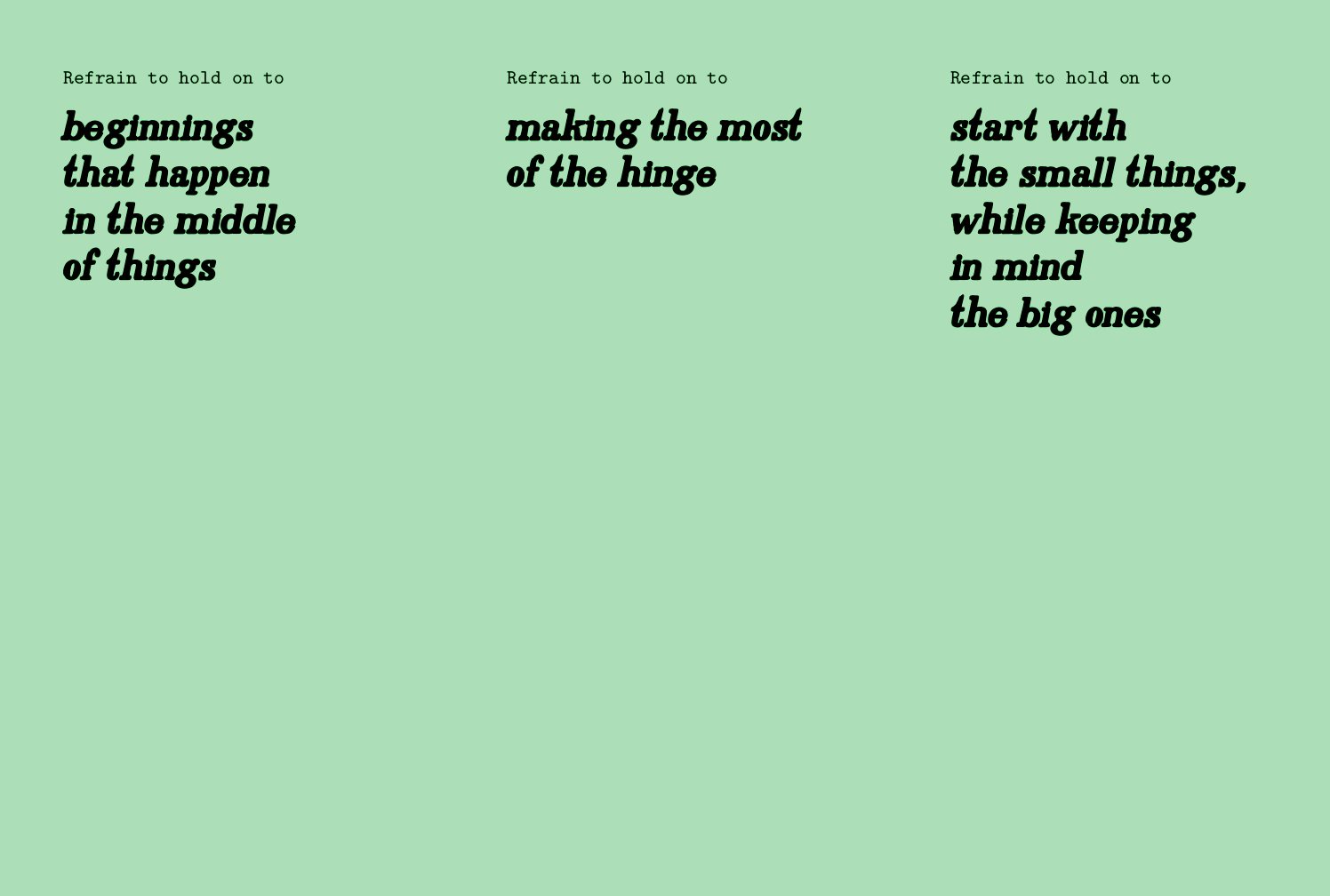 Refrain to hold on to: beginnings that happen in the middle of things

a little song, a nocturnal creation myth or ‘sketch’ in the middle [...]; it is not a genesis story of the logos and light, but a song of germination in darkness [...] I begin with it because doing so calls attention to the improvisational elements of any beginning, which always happens in the middle of other things.

Refrain to hold on to: making the most of the hinge

Here, the surge as rhythm emerges from attempts to reach beyond the confines of limited places and routines, and yet retains a microscopic view of the constantly surprising details about the places that could be left behind. This is a rhythm of endurance, of surging forward and withdrawing. It is not a rhythm of endless becoming nor of staying put; it is making the most of the “hinge,” of knowing how to move and think through various angles while being fully aware of the constraints, the durability of those things that are “bad for us” (Stoler 2016).

Refrain to hold on to: start with the small things, while keeping in mind the big ones